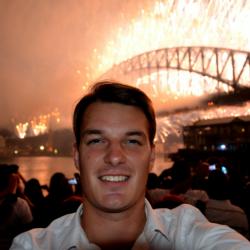 Dejan Süc was born in 1989 in Murska Sobota and started studying History and Geography at Faculty of Arts, University of Ljubljana in 2008. He successfully defended his Master’s thesis, entitled “The Jewish population of Dolnja Lendava in the interwar period,” in September 2015 and acquired a Master’s degree in History and Geography.

Dejan mostly researches the cultural, political and economic impact of Jews in Lendava from their settlement until nowadays. Apart from that, he is also looking for lost Jewish vital records and doing genealogical research for Jewish families in Zala and Vas Counties, Hungary.

Dejan Süc will present the main sources of knowledge for those researching their Jewish ancestors in territories in Zala and Vas county, which belonged to Hungary before the Treaty of Trianon, but were separated after it and belong to Slovenia and Croatia nowadays.

Based on the 1910 Census, there was an important Jewish community in the cities of Alsólendva (Lendava in Slovenia), Bellatincz (Beltinci in Slovenia), Muraszombat (Murska Sobota in Slovenia), Perlak (Prelog in Croatia), Csáktornya (Cakovec in Croatia) and Muracsány (Gorican in Croatia). Around 1910, there were 978 Jews living in those cities in Slovenia and around 1.600 Jews in Croatia, in both cases of Hungarian origin.

There are no online databases for those areas. The vital records were destroyed during the Second World War. The presentation will show the other options researchers can use to find their family members in those places.