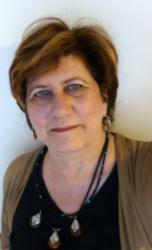 Susan G. Weinberg left a long career in finance to focus on artwork, writing, public speaking and genealogy research/consulting. The thread that connects all of these pursuits is solving puzzles and telling stories.

Much of her artwork and writing grew out of her interest in family history. Her most recent series of artwork, the Jewish Identity and Legacy Project, is based on a series of oral histories with Jewish elders.

Susan has created two Kehilalinks on her ancestral towns, speaks nationally and is active as an organizer, speaker and website creator for the new Minnesota Jewish Genealogical Society.

Her blog may be viewed at http://sgweinberg.blogspot.com/

The Jewish Identity and Legacy Project is an arts/ interview project with elders within Sholom Home, a Jewish elder facility in the Twin Cities. Most were in their 90s and spanned three groups: those who grew up in early immigrant communities; those who were survivors; and those who were immigrants from the former Soviet Union. A second set of interviews were cross-generational with children and grandchildren. These three groups represented the three strands of immigrants who came to the Twin Cities in the 1900s and explores their experience.

This presentation will make use of short video clips and artwork based on stories to understand the experience of immigrants from varied backgrounds that compose Jewish communities within the United States. Through story it will explore the legacy that these immigrants bring to their communities.

Observations on successful oral history techniques will also be provided.

Topics: Holocaust research, Immigration and migration over the ages, Jewish history and culture